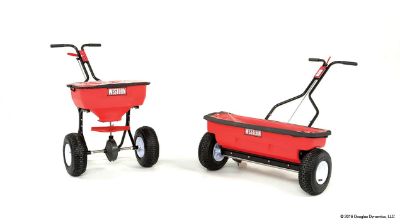 One of the many questions we get here at Traffic Safety & Equipment/Plow Parts Direct is whether to invest in a salt spreader for your truck or whether to stick with a walk behind salt spreader. There are many factors to consider when making your choice, so we’ve compiled a few things to consider such as the type of salting, the cost of the equipment and your future goals for your company.

The first thing you’ll want to consider is what type of work you’ll be doing. Is your main focus driveways? How many will you be doing? Is your focus more on commercial properties? These are important questions to answer because the type of salting you plan on doing will play a key role in which method you should use. If you are going to be doing your own driveway, it would make more sense to use the push salt spreader. Even if you’re the best neighbor and help with one or two other driveways, you would most likely best be served with this option. We recommend this because it would be a quick and simple way to accomplish your goal without the cost of the larger equipment.

Commercial properties are a different story! The amount of salt you’ll need combined with the larger area to cover makes the salt spreader for your truck the best option, and potentially even a full hopper spreader depending on how much salting you need to do! Having the functionality of salting while you’re plowing not only cuts down on the amount of time spent at each location, but also the time needed to refill! Push spreaders generally hold about 100-160 lb worth of salt like in the case with the Western Broadcast or Western Drop spreader whereas the tailgate spreaders can hold a significant more amount of salt. For example, the Western Model 300 holds up to 3 cubic feet of material and the Model 1000 and 2500 can hold up to 8 cubic feet and 8.5 cubic feet respectively. This will cut the amount of time loading salt into your spreaders down significantly.

And I’m sure we’ve all experienced the overnight storm where you’ve been awake for 24+ hours on the job. Having a tailgate or hopper spreader can be a saving grace when you’re exhausted and want to stay in the warmth of the truck! In some situations, you might even want to opt for both the tailgate salt spreader as well as the walk behind salt spreader. While the tailgate spreader can be used to cover the parking lot quickly and effectively, the push spreader can handle the sidewalks and tough-to-reach places that your truck might not be able to access. Having a second method of dispersing salt is also a great idea, due to the possibility of the tailgate spreader breaking during the job. The most common issue we see with the tailgate spreaders is that the operator backs into a pole or building with the spreader. Having that second backup method can come in handy in a tight pinch.

But what if you’re doing driveways at multiple locations? That is going to be less of a cut and dry answer. It might not make sense to invest in the tailgate spreader for the amount of work you’ll be doing. However, it would also alleviate the work of loading and unloading your push spreader at each location. If loading and unloading the walk behind spreader is an issue, or if you want the expedited completion of the job, the tailgate spreader would be a great idea. You could go with either option at that point and we would suggest considering both the financial aspect as well as your future goals for your work when making the decision.

The cost of the equipment can also play a large role in which option you go with. Push spreaders can vary from around $450 up to around $1,000, and in some instances even more depending on the level of function. On the other end of this, tailgate spreaders can cost anywhere from $1,300 to around $3,300 depending on which model and size you opt for. While the pricing might seem high in some respects, the functionality and time saved with either option make it a no-brainer. Your financial position as well as the future goals for your company can help determine your option as well. For example, you might only have a few client’s driveways now, but if your goal is to grow your business, it might make more sense to spend a little extra money at the beginning for the investment in the equipment that will help your company grow. On average, most snow removal specialists earn their money back on their equipment in the first season.

As you can see, there are various different situations and depending on which you find yourself in could alter which equipment we would recommend for you. If you would like additional clarification, you can find our quick explanation on our YouTube channel HERE or by reaching out to us here at Traffic Safety & Equipment Co./Plow Parts Direct!